As I mentioned in my last post, I have spent the first week in Okayama visiting my brother, it was fantastic! I am currently in Tokyo for my second night and I am almost settled in. Time to recap my first week! 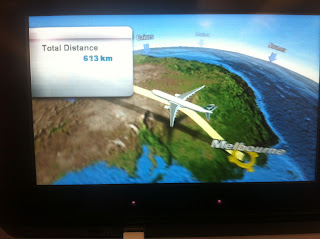 I had a great flight, even with the annoying transfers. I started in Adelaide with a brief stop in Melbourne. then a 3 hour stopover in Hong Kong, followed by a 3 hour flight to Tokyo. The plane had very cool HD touch screens but sadly I had seen 90% of the films on the system. I did however enjoy watching  'Painted Skin 2 : the Resurrection'. The hardest thing about the flight was the HK transfer at midnight, flying back out at 4am. This is prime sleeping time! I planed ahead and had a good sleep between 7-11pm.

I made it to Tokyo

I arrived at Narita airport at 6am in the morning. Got all my belongings and made it through customs. First thing was to have a shower! I love public showers in Japan, so clean and nice. I have to say though, the shower facilities at Osaka airport are much nicer. Showed, clean and in fresh clothes, I made my way to meet up with César Zanardi.

I was only in Tokyo for a few hours before catching the Shinkansen to Okayama, so I was really happy we managed to meet up! Not having much time, César suggested we go to Asakusa. I haven't been there so thought it would be fun. 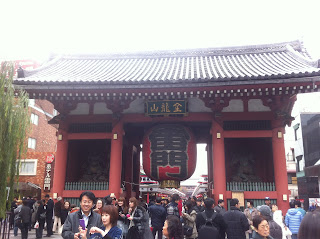 First time seeing Sensōj, it was packed with tourists! 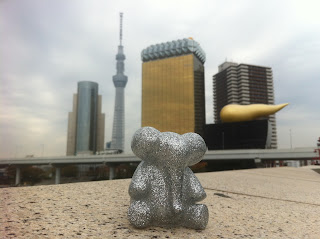 I have always held back calling Waniphant a 'kaiju' directly but when an old drunk Japanese man walks by and yells out 'AHHHH KAIIIIIJUUUU' I think it is safe to say Waniphant is a kaiju.
We did take some photos of Cerrito and Waniphant together but it was of a special Cerrito that César will reveal later. Lucky for us, TOVI did a really cool sketch to celebrate Waniphant and Cerrito meeting. 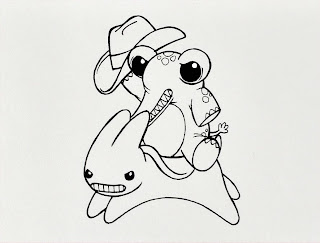 Yeeehaaaa ~~ Love this sketch by TOVI


After taking some photos, it was lunch time! This was an important occasion as it will be my first meal in Japan! With so many choices, it is always hard to decide. It doesn't help that I am shocking when it comes to deciding where to eat. Interestingly, for my first meal in Japan, I had Indian curry!!! 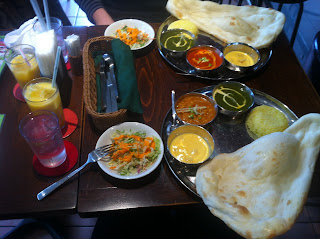 Look at that spread! It was really yummy!
Toy shopping

After lunch we went to Ueno to check out Yamashiroya, a single toy store with the lot! With not much time before I had to leave, it was a perfect choice. It was my first time there and seeing so many toys was overwhelming but I loved it. 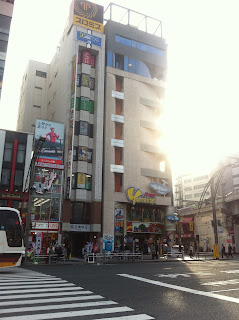 "6 levels of happiness" - César Zanardi
The store is amazing! Full of big licensed series, character merchandise and independent sofubi makers. Trying to keep my budget in check, I only got myself one toy. Originally I wasn't going to get any but I have to thank César for the little 'push'. 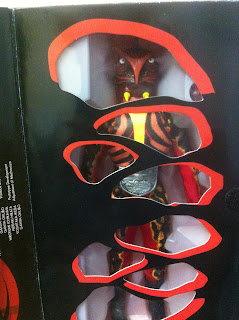 "Shocker is the organization that spred of world allu with the clique and very fierce and horrible. Their evil purpose what to change the humanbeing and subordinate mankind to them and conquer the world." - word for word Engrish text on the box.

Time to head to Okayama 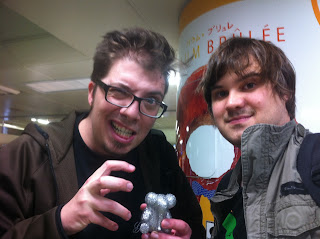 3 handsome gentlemen; César, Wanihpant and Shane.
With my time up, I had to say goodbye. César is a great guy and we had a great time, especially talking about Australian rock music! Tired and exhausted, I still wanted a photo to remember the occasion.

Considering I have only covered the first few hours of my time in Japan, I will leave it there for tonight and continue the story next time. Thanks for reading!
Posted by Shane Haddy at 3:04 AM

Alright! You made it to Japan :D

Glad to see your trip is going well.

Yeah, it has been a blur. I keep saying that but it truly feels like that!

Thanks for reading the blog :D