Shane has asked me to write an entry on his blog telling you a little about TOVI.

So buckle up and enjoy the ride??!!

The last 6 months has been quite interesting for me, as well as completely off tangent to what I normally do...

It pretty much all started with Mark Nagata's EYEZON. I'll be honest... I'm not a big fan of Kaiju. It's just that they... well... they're pretty ugly... sorry to say. They’re monsters…

I'm into cute and pretty things. Like Rilakkuma. He is my GOD.

Anyway, Shane absolutely ADORES Eyezon and asked me to draw pictures of him riding this beast. This kaiju is fun to draw, but those damn polygons on his body….. *RAGES* 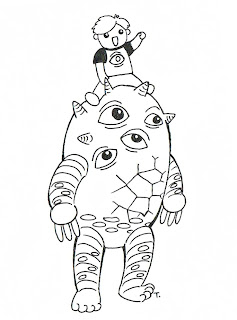 I didn't have a Twitter before this either - I don't understand the concept of it... and as you can see by my rants, I still don't. I sort of use it like a chat box (much to the annoyance of my followers).

After viewing some of my art work, I was invited to participate in MAX TOY 5th ANNIVERSARY over the summer break.

Of course I said yes... even though I didn't feel I was up to standard. I’ve never even conversed with a person in the arty-farty business before, so I was quite apprehensive.

Hence I drew 5 different pieces – as I wasn’t sure what kind of artwork he wanted… that and I had loads of ideas of where I wanted to go but wasn’t sure which one would work.

Here are the pieces for the MAX TOY 5th ANNIVERSARY – which was on show in Japan and US earlier this month! If you go on the Double Punch website you can still purchase them and help fund me through medical school…*just joking* (^_^) 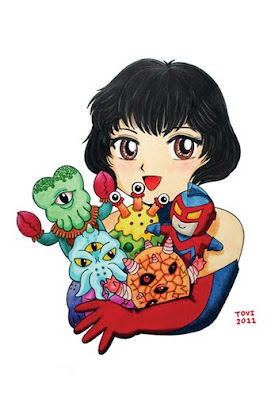 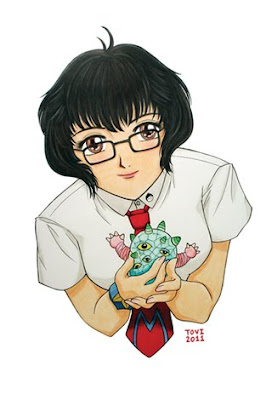 I have a soft spot for girls that wear specs… mainly because I do too. 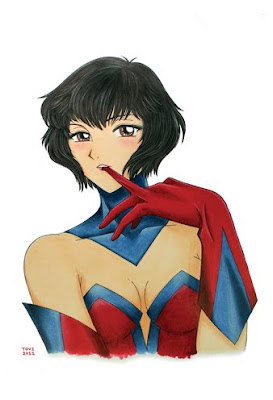 This was the hardest one to draw – mainly because I couldn’t get her body right at all. 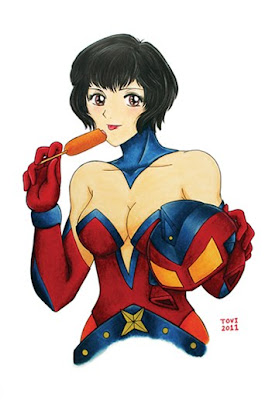 (Note: I have an unhealthy obsession with CORN DOGS ever since I was little… which was re-awakened when watching Man Vs. Food and that COZYDOG… oh my goodness… *salivates*) 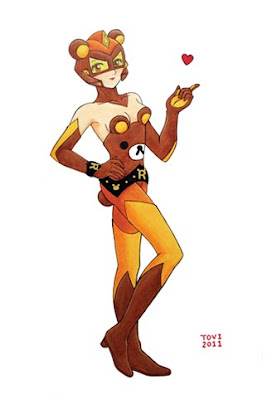 As mentioned earlier, I also have an unhealthy obsession with Rilakkuma

I've never done anything arty before (except for random entries into art competitions at anime conventions). But during this time, I did a lot of cel-painting and hadn’t really used COPICs before.

My parents did not allow me to practice my art skills during my school years.

If I drew, it was in secret (mainly in between my maths books and stuff).

I've never had any formal training, and what I have learnt, I did through observation and making MANY mistakes (>_<"). My inspiration comes from CLAMP and Kaoru Mori – all are female artists and also have obsessions with pretty things.

Anyhoo, to continue the story.

It was at the same time that Shane and I decided to make our first Kaiju. You've all seen the photos of it, so I won't bore you of the details. I've only ever used LaDoll before, so it was really weird to use something that you had to bake... And of course, I'd have a tray of fries in the oven as well (my theory behind this was to kill two birds with one stone).

There’s something very unattractive about sitting cross-legged on the floor with clay and chips in your lap whilst watching TV... Oh well.

I had to go back to school in January, so I pretty much packed up all my art stuff to bring with me. At that time, I hadn't started colouring the MAX TOY stuff, so I was pretty behind. I think working full-time over summer didn’t leave much spare time for me anyway.

In any case, I was quite relieved to have finished them in time for Mark and sent them away in a postal tube (or fallopian tube, as one of my medical colleagues described).

TOVI's art is currently on display at Double Punch, San Francisco till the 14th of May.

I have all the post cards and they look wild! Yet, the original art work has so much more depth that the prints were not able to capture! So if you get a chance, go check it out and all the other artists work at the Max Toy co 5th year!

If you are lucky, you can still get some of TOVIs original artwork or postcards on the Double Punch - Max Toy co 5th year anniversary page -
http://doublepunch.bigcartel.com/category/max-5th-anniversary

The act of being random beyond all human capacity
Posted by Shane Haddy at 8:36 PM